Today is Thomas’ 3rd birthday and whilst it’s obviously a time of great excitement for him, I’m taking the opportunity whilst he naps to also think about how much has changed! On the one hand, he is as in love with trains as he was a year ago but on the other he has grown so much. I don’t just mean by size but really in personality – cheekiness, tenacity and good humour.

Over the last few years we’ve all really settled into our home and I was thinking the other day that it’s actually the only place that Thomas has ever known. I really value that continuity for him and the ease and familiarity we have here. We really love our neighbours (and were genuinely sorry to see some move away this year!); and I am more than aware that we have a cult-ish appreciation for the kid’s actually being able to play out in the street. But of course, our needs are also changing…

We’re lucky to have a four bedroom house but we currently utilise one of those rooms as a playroom as it’s downstairs. That obviously means that Katie and Thomas share a bedroom. They both co-slept as babies and both seem to get comfort from each other’s company. But equally it can be a bit of a nightmare: Katie has never really been able to fall asleep before 8.30pm at the very earliest – this wasn’t the case with Thomas… until now.

In many ways, their chatting to each other and singing songs together in the dimness of the night is cute. In others it actually makes me want to cry (largely from tiredness). Then there’s the ‘telling on each other’!! A couple of nights ago, Katie had thrown her duvet on the floor and was trying to claim that Thomas had pulled it from her top bunk. You know… the one with really high sides that Thomas can in no way reach. In short, the sharing isn’t exactly ideal.

But equally, I’m also not sure we’re ready to give up the playroom. If the kids are bad at bedtime at the moment, I can’t even imagine what would happen if they had toys in their rooms. If they can be distracted by some books and a star light then what would happen with a train track?!

Of course, we could turn the living room into a playroom – but as that leads through to the kitchen I just have visions of cooking and stepping on nothing but Lego! So that is NOT a solution.

At the moment, our kitchen and living room look out on the garden and our garage – currently separate from the house by about a metre. It’s occurred to me that this could change if we could just build a small passage way between the house and the garage. By converting the garage we’d not only end up with an extra room but also – the house would completely wrap round the garden.

A few months ago I wrote about ‘planning a garden with kids’ and I’ve been giving this conundrum some more thought. This summer has been glorious, and I’ve often thought how nice it would be to make the most of those final hours of sunshine in an evening.

Right now the living room doors open to our patio which creates a lovely flow between our indoor and outdoor space. Whilst we are very lucky to have such a useable living space, I’d absolutely love to blur the lines of outside and inside even more. Realistically we’re not touching the garage any time soon but being able to extend into the garden would be a great step.

I’ve been looking into the option of bi-folding doors rather than the traditional patio doors that we currently have – this would create a wide-open window to let all that lovely, natural light flow in. I’ve been looking at these bi-folding doors from Quickslide for inspiration – they come in a huge range of colour options and are extremely durable – which is a must-have in our house! 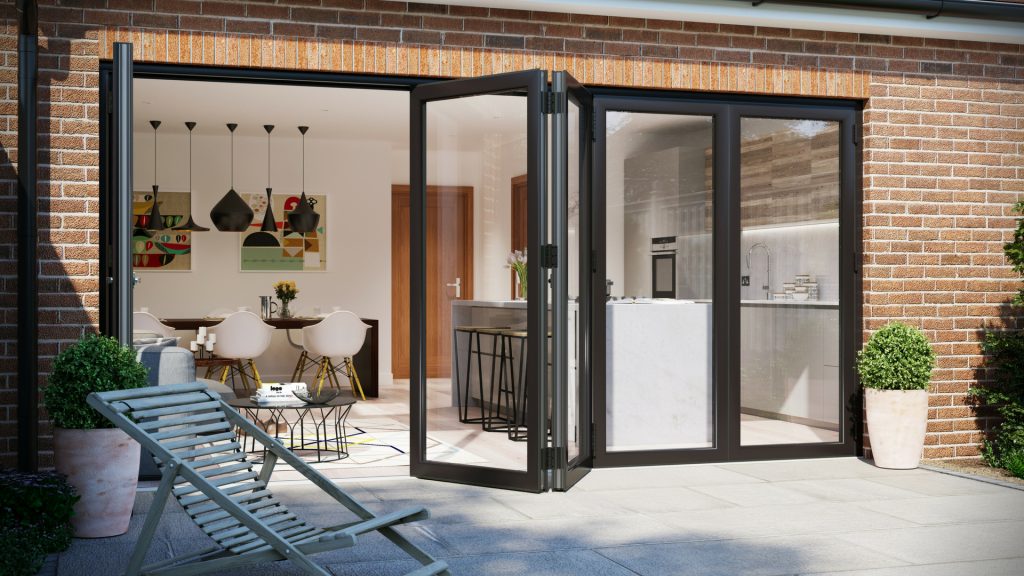 Bi-folding doors would mean we would have a much clearer view of the garden so could watch Thomas run around to his heart’s content and as the winter nights draw in, we can watch the stars twinkle from our cosy living room.

It honestly feels like yesterday that we were bringing Thomas home from the hospital. Our ‘magical baby’ who of course shares Harry Potter’s birthday! Katie was then the three year-old in our home and we quickly descended into the world of nappies and that amazing baby smell. It feels like a lifetime ago already and I’m amazed how time has flown by.

This summer, we’ve been far more about bike rides, beach days and days out on the train. It’s funny how life really does change so quickly!

2 thoughts on “How the view from my window changes…”