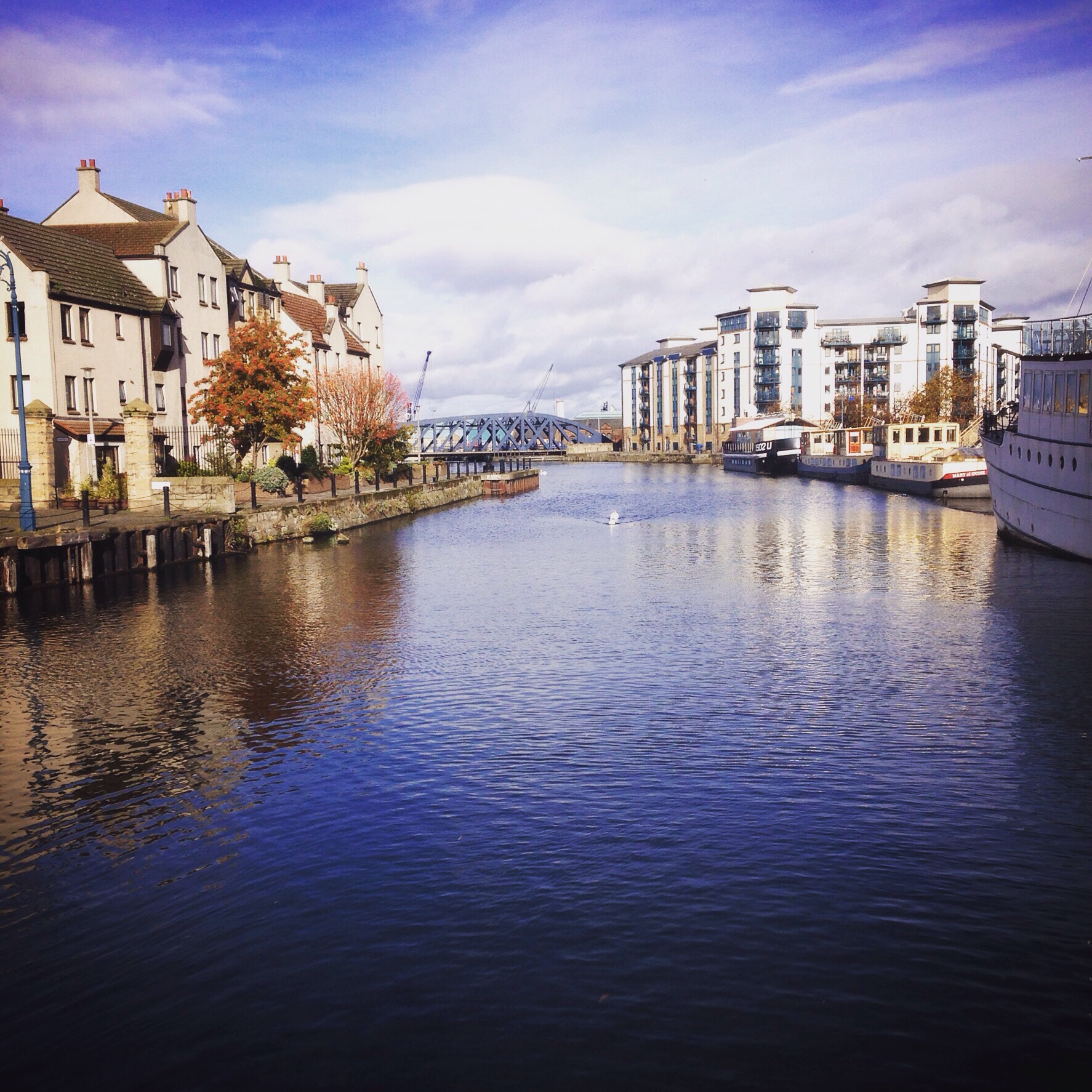 Food markets are a highlight of Edinburgh weekends for me. So with the arrival of a sunny weekend, I took the opportunity to meander round the Shore at Leith whilst checking out the new(ish) food market there.

Katie had been up at half-five that morning so I guessed she wouldn’t be up for a long walk. Rather than being deterred I stuck her in the buggy and set off at a decent pace for once! She asked to get out (when spying the canons) but on the whole was happy to sit and take in everything that was going on. I did think she looked a little ridiculous as her legs are so long now that they almost drag on the floor. However, I caved into demands and gave her a dummy so thought maybe she would just look like a rather large baby.

The market was really friendly and not that busy at all – so perfect for the buggy and going round at a lazy pace. I was quickly drawn to ‘Aye love Real Food’ who were selling home-made, free-range Scotch eggs which I thought Mike might appreciate – he was completing some DIY jobs at my Mum’s flat so I thought he was deserving of a good snack! I chose one of the Chorizo and Tamworth Pork variety and thought that it better be good for £3.50. I have to be honest that having delivered it later (and having stolen a bite), I regretted not buying more and will make the most of the 3 for £9 deal next time!

Next to catch my eye was TeenieTings and Terrariums. It took me a little while to work out that it was because they were selling plants that weren’t in any soil. The lady at the stall was happy to explain that they were ‘airplants’, which are adapted to absorb water and nutrients from the air allowing them to live in unusual places so can be presented in all kinds of ways. I thought it was kind of cool as I’m not that great at remembering to water  plants and these just need a soak every so often! I have to say though that they looked a bit weird to me but could understand how you could become a bit obsessed if you had the space.

My next stop was Phantassie Organic Vegetables. They had done a super job presenting all their produce and really made me regret not having cash with me! The guy selling caught me trying to take a picture so was happy to pose before chatting away with Katie. She was completely sold as he gave her an apple which she began munching on straight away.

I’ve since looked at their website and am delighted that they have a Veg Box Scheme which can be delivered to your home. We subscribed to a similar scheme when I was living in Sussex and I enjoyed coming up with things to cook each week to avoid any waste. It doesn’t seem to be unrealistically expensive, but I actually don’t know how much I usually spend on fruit, vegetables and eggs a week. Throughout November, I’m going to be monitoring my groceries more closely so will definitely work out if these are something I want to budget in come December!

Having woken up so early in the morning after a restless night with Thomas, I was keen to sit for a while and had heard good things about Cafe Tartine, which was only a few steps away from the market.

I was greeted at the door by a very friendly member of staff who asked about our day and what we were looking for. After ascertaining I was just looking for coffee, she showed us through to the conservatory – home to some very comfortable couches and armchairs! I had spied some pastries on route to our table, so ordered a croissant and latte whilst Katie requested an apple juice to go with her apple! The waitress returned almost immediately with our order and spent some time chatting away with Katie. She checked back with us from time to time and was a  positive part of our experience.

I have actually boycotted cafes before for serving inappropriately small croissants so was happy to discover that it was not only a decent size but properly flakey too. My decaf coffee was also excellent and came in a decent sized mug. I spied some interesting dinner options on the specials board with rabbit and pigeon appearing, so asked to see the evening menu whilst we were eating.

The menu was certainly enough to get my taste buds going and to lure me back. It had such a broad range from a straightforward burger to fillet of sea bass with saffron peperonata and clams. I thought the kids section was a little unadventurous with salmon fingers being one of the options – Ben particularly would chose beef bourguignon  from the proper menu over sausages any day.  I checked with the waitress,  who said they could actually just try and do a kids portion of anything on the menu,  which reaffirmed my wish to go back!

There was a number of dogs there during our visit and fliers were out advertising a dog fancy dress evening. I went to prop Thomas up on cushion but noticed it had a number of dog hairs on so just put it to one side but have to admit I was a little put off. In retrospect, I’m not sure if I should have been so bothered by it. I don’t think I inspect cushions in other coffee shops that closely and am sure I’d find human hairs if I looked closely enough. Maybe I’m just a bit anti-dog after our Halloween trail experience! What do you think? Are you pro-dogs in restaurants or should they just be left at home? I still want to go back but that may have more to do with the kilo of mussels with cream, garlic and white wine that’s on offer!