We’re just back from a brilliant day at the Edinburgh Festival – made even more so because of Kaput. Marketed as ‘slapstick and silent clowning’ – I would argue that it was so much more than that. All four of us – aged between 3 to 50 (something) – were laughing throughout and left feeling that was… WOW good.

I must admit that before the show started, I was expecting an hour of silliness that would appeal to the kids. Slapstick to me is someone being daft, dropping some things and generally making my kids laugh. I would chuckle politely and enjoy the kids having fun whilst secretly being glad it was over. So I am seriously delighted that Tom Flanagan has dispelled every pre-conscieved notion I had.

His foot did not get stuck in the bucket, he didn’t fall repeatedly in a puddle, in short… it was unpredictable and at times down-right outrageously funny. My problem with writing this review is that I genuinely don’t want to tell you what exactly happened. I don’t want to tell you because I want you to go and find out for yourselves. It’s hard to explain without giving the game away but it was both clever and silly. I found myself caught by surprise time and time again – and yet the kids equally were having fun. 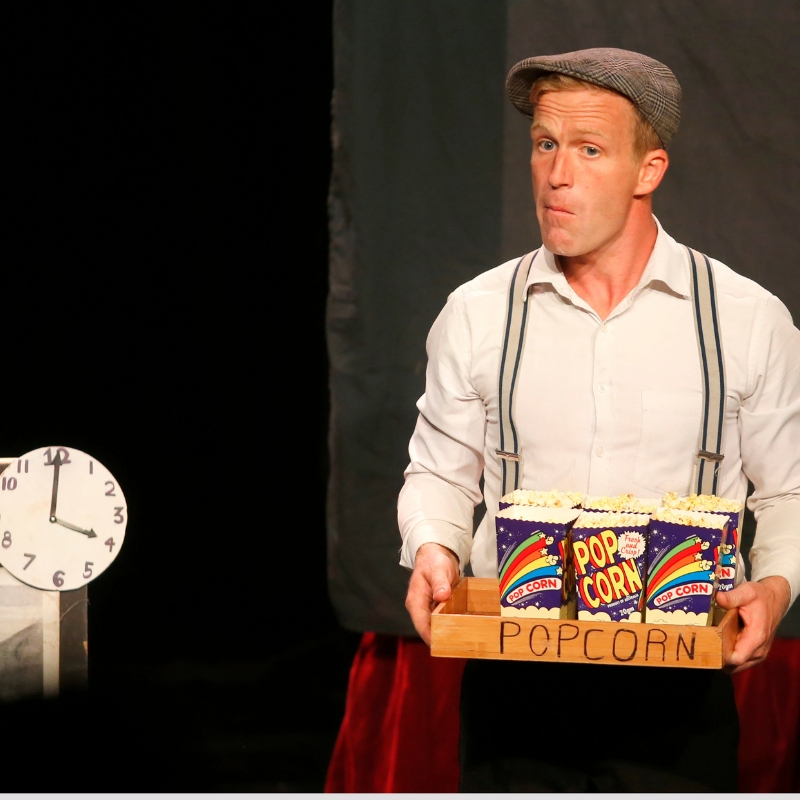 Thomas (aged 3 and 2 days) can be a wriggly ball of energy at times but has really been enjoying live shows. He’s always enjoyed music and usually just sits in awe. Today he was different – he was in hysterics and utterly engaged with the show. He couldn’t resist turning to his Dad to exclaim ‘that man is FUNNY.’ At times, I was slightly concerned that Thomas was taking a mental note to try everything at home; he loves to be cheeky at the best of times and takes utter delight in putting his shoes on the wrong feet whilst dancing round singing ‘la di da da da’. Whilst this makes for easy entertainment it’s not exactly something I like happening first thing in the morning. Now, thanks to Tom – he’s equipped with his own kazoo and has been spent this afternoon hanging upside down on his slide. I rather suspect it’s a show we’ll be going back to this year – can someone please get it on CBBC?!

Katie – who aged 5 is often acting more like a disaffected teen – also could not fail to be entranced by Tom. He was really clever in the way he involved members of the audience (both young and old) and her face could not have been more delighted when Mike (hubby) was included in a skit.

I have to say that I’m always pleasantly surprised by members of the audience on stage. They often can really make a show and this was no exception. Tom really bounced off their reactions and at times, I could tell he was as equally entertained by what was happening! It was very obvious that Tom had a lot of skill in what he was doing – not only in that his act was refined and delivered flawlessly – but because some of his moves were more like acrobatics. His energy seemed to be never ending as he took us all through the story of his show – of course, never actually uttering a word.

I think that actually made it more accessible for the kids as there was no language requirement. There were no political jokes to go over the kid’s heads – they just understood the silliness. Equally for adults there were a couple of more risqué jokes but so subtle that the kids didn’t have a clue!

I asked Kate what to tell people in this review – her response was “It was very funny and if people want to laugh they need to go… especially if they like popcorn!” I should add that she added that last bit with a little grin on her face and once you’ve been you’ll understand why she is a mischief!

P.S. We were kindly gifted tickets for the purpose of this review but all thoughts, words and opinions are our own. BUT I have news!! The code for 2 for 1 tickets if you book in the opening weekend 2-5 Aug through Assembly Festival’s site: ACCESS

I hope that you get a chance to go and enjoy the show as much as we did! Don’t forget to share your festival goings on with us over on Instagram and use #Edinburghwithkids