In a continued celebration of motherhood, today I’m sharing a birth story from my friend Nicola. I can totally relate to so many aspects of her story but especially initially brushing off being in labour! With Thomas, I was so absolute in my certainty that no baby is born on their due date I was adamant I couldn’t POSSIBLY be in labour. Thankfully, a very lovely midwife on the end of the phone disagreed!

To understand the title of this one you’ll need to read to the end and I hope you enjoy:

An Appreciation for Gas and Air

I was convinced that my first baby would be late. All I seemed to read online was about Mums to be who were waiting endlessly for their little ones to arrive and invariably ended up induced. I was convinced the same would happen to me so when I woke up at 4am on Thursday 19th May with period type pains, two days before my due date, I brushed it off.

I’d had a relatively straight forward pregnancy and apart from my fundal height measuring a little low when I was 27 weeks pregnant, everything had gone smoothly. I was as prepared as I could be for the unknown and although we hadn’t picked out a name, I was excited to meet my little bundle of joy.

The period type pain was strong enough to wake me and get me to walk to the kitchen to find some paracetamol. I am no stranger to period pain and have suffered with it my whole life. I settled back into bed after gulping down some water and the tablets and tried to get some sleep.

When my husband’s alarm went off at 7am, the pain hadn’t subsided. He decided to take the day off work as he was convinced this was it, although I remained doubtful. He rang work to tell them I was in the early stages of labour and I groaned to myself thinking I was wasting everybody’s time.

By 10am the pain had been coming and going for six hours and was starting to feel quite intense. I was able to breathe through each pain and there was a definite beginning, build up and end to each one. My husband advised me to ring the hospital and I spoke to one of the midwives there called Hana. You may know Hana from the series One Born Every Minute which was filmed at the hospital I was to give birth at. She is just as lovely and sweet in real life as she is on the TV show. While we were talking, another contraction started and she talked me through it as I bounced on my ball. She said things were in the very early stages yet and I should wait at home for as long as possible and try ringing again in the afternoon.

My husband was adamant I needed food to keep my strength off so he went out to get some bacon and sausage sandwiches and left me to deal with the postman who had to watch as I had a full blown contraction when he came to the door. I couldn’t face eating the greasy food my husband returned with but managed a few bites under his stern instruction.

The afternoon wore on slowly and painfully. I tried getting in the bath to help with the pain, but couldn’t stand being restricted to the confined space. I bounced up and down on my ball, but it didn’t really help and I paced the hallway as each one came on and I tried to battle through it.

By 6pm, the contractions were around a minute long but weren’t any closer together than they had been in the morning. I was getting concerned with the amount of blood I seemed to be losing and wasn’t sure if it was normal or not. We rang the hospital again but they were insistent that it was still too early for me to go in, but if we were concerned we should go to the MAU (Maternity Assessment Unit) to be checked over. At 8pm, I couldn’t wait anymore and we drove the two miles to the hospital.

When we arrived, we were curtly told to go to MAU because I wasn’t in labour. We entered the MAU waiting room and in front of the room full of people I had contraction after contraction. A midwife came out (probably to see what all the noise was about!) and took me into the toilet to have a look at my knickers and see how much blood I was losing. She decided it would be a good idea for me to have a cervical exam to see how far along I was.

I was left waiting in a side room for around ten minutes for her to come back. I paced the room a thousand times as the contractions came thick and fast. After what felt like hours, she returned. Having a cervical exam without gas and air is probably one of the most painful moments of labour and it was excruciating as she put her hand up where no hand had gone before to assess how far along I was. Finally, she removed her hand and gave us the happy news: I was 8cm dilated.

What a relief. I was rushed over to the MLU where I was given a birthing pool, a lovely midwife called Alice and a birthing pool full of lovely warm water.

Alice told me it was likely I’d progress by 1/2cm every hour so she would check me again at 12.30am. For the next three hours I sat in the birthing pool drinking water, chugging on gas and air and giving my husband evils each time he tried to play Candy Crush on his phone.

Just before midnight Alice came in and asked me when I’d last had a wee. I hadn’t had one since I’d been there. She asked me to wee into a bowl for her and when I got up to go to the toilet, I couldn’t. I was shaking so hard while I was in the cubicle and I thought it was because I was so cold being out of the pool. When I told Alice I couldn’t wee she told me I’d had to have a catheter as the bladder could block the baby getting out. Cue the next most painful part of the birth which was having a catheter inserted and my urine drained, a very strange feeling indeed.

Alice decided to do a cervical examination and had to call someone else in to do it as well as she couldn’t tell if there was a bit of cervix remaining or she could feel baby’s ear. At this point I was lying on the floor propped up with blankets and pillows. After the second midwife had a look, they decided it was time for me to start pushing.

I pushed for two hours. All that I can remember from this phase is that I was sick several times and my husband caught it in a bowl. I remember telling him off, reminding him that I hadn’t been hungry earlier and he’d made me eat.

I was absolutely exhausted and no amount of pushing seemed to get this baby to come out. Alice advised me that a doctor was going to be called to make a decision on what was to happen next. I was wheeled into another room with bright lights and lots of people and I was scared. The words c-section were bandied around, but then the doctor walked in, took one look at me with my legs in stirrups and my foof on view to the world and declared it would be a ventouse delivery.

The doctor injected me with an anaesthetic and put his hand inside me to place the suction cup on my baby’s head.  With the next contraction I pushed, and he pulled and the baby’s head came out. Painful. Waiting for the next contraction to come so you can deliver the rest of your baby is the longest period of time ever. Longer than waiting for the midwife to come in and examine you when you have no gas and air! Finally, the contraction came and at 3.07am on 20th May 2016 my baby boy was born.

He was placed into my arms immediately and his Dad cut the cord after waiting for two minutes. After a couple of minutes of skin to skin he had to be checked over by some doctors and weighed and meanwhile I delivered the placenta after receiving an injection into my thigh. Daddy got a few cuddles while I was stitched up thanks to a second degree tear. 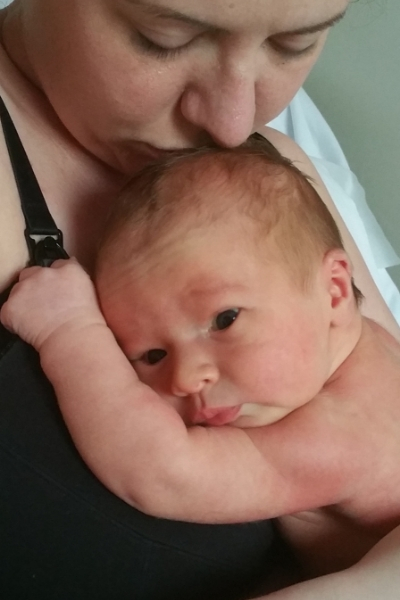 One thing that sticks in my mind is that an hour or so later a midwife told me not to worry that I hadn’t given birth to him myself and that it’s quite common. Up until that point I hadn’t felt any worry at all as I’d done the whole thing myself, medication free with only a small amount of assistance from a doctor. However, this comment has played on my mind ever since and I do worry that when it comes to having another child that I won’t be able to push him out myself again.

I am really grateful that I went into labour spontaneously and I was able to manage with only gas and air. I am also really grateful to the doctor who helped me deliver our baby boy as he was nothing short of polite, knowledgeable and confident and when you are in a situation like that, that is just totally what you need from a medical professional.

Would I take pain relief next time? I’m definitely going to leave my options open because although I managed this time, every single birth is different and maybe next time I’d like more help getting through the active stage of labour.

Thank you Laura for letting me share my birth story which always leaves me feeling very emotional, pensive and ever so grateful that I have a happy and healthy little boy who is my pride and joy.

One thought on “An Appreciation for Gas and Air”