I’m ashamed to say that despite living in Edinburgh for almost ten years now, I had failed to visit Holyrood Palace until now. However, with the allure of a Family Activity Day and Katie’s utter belief that we’d bump into the Queen – it was on the agenda for not one, but two weekends running.

For anyone who reads the blog regularly (so Mum/Megan/Francesca?!) you’ll remember that I posted to Facebook and Instagram about Maria Merian’s Butterflies.

As a one-off event, TV presenter, explorer and entomologist George McGavin was hosting a day in which visitors could learn more about the world of insects. This could not have been more perfect for Katie who had been busy learning about bugs at preschool. Armed with her bug hunting kit and guidebook, she was certainly ready to put all her questions to George. I was also secretly delighted that I would have some time answering all her questions!

Sadly, I was working the day of the activity day so Grandma was tasked to visit with Katie. They were lucky, in that the exhibition wasn’t at all busy and consequently they could really take time to make the most of every aspect.

As it turns out, George actually had attended the same school as Katie and was more than happy to spend a long time talking to her. She showed him her book and he explained more about each creature before telling her of his own adventures. Katie was astonished that he could then show her pictures of the spiders that HE had collected which has only subsequently increased her bug collecting habits! It was so lovely to hear that he had taken such time to listen to her tales and that he could really talk to her at her level. I only feel a little sad that the exhibition wasn’t busy and that there are many children who equally would’ve enjoyed this opportunity!

Katie also made her own mechanised flying butterfly and of course, to have her face painted. Face painting is a bit of a weird one as Katie really loves having it done but the inevitable removable is so sad! She managed to keep this one on for an extra day even though it was a tiny bit smudged!

Whilst the illustrations may not have been your typical ‘kids art’ of the modern day, Katie was really quite taken with them. Grandma reported that she examined each one in turn – no doubt thinking how to capture such specimens in the future!

I’ve found her recent hobby quite bemusing given that my Grandpa was actually also an entomologist. I used to spend time with him when I was a child catching spiders and isopods to study under the microscope. Although Katie never met him and hasn’t really been told anything about it – you have to wonder how much is in her DNA.

The following weekend, so as not to miss out, I headed to the Palace myself with Katie and Ben in tow. Katie still under the assumption that we’d meet the Queen if we were going to see her bedroom – and Ben just happy to be going somewhere new.

After collecting our tickets we wondered through the gateway to the outer courtyard, collecting our audioguide handsets on route. Katie and Ben were offered ‘family’ versions and we were given basic instructions how they worked! 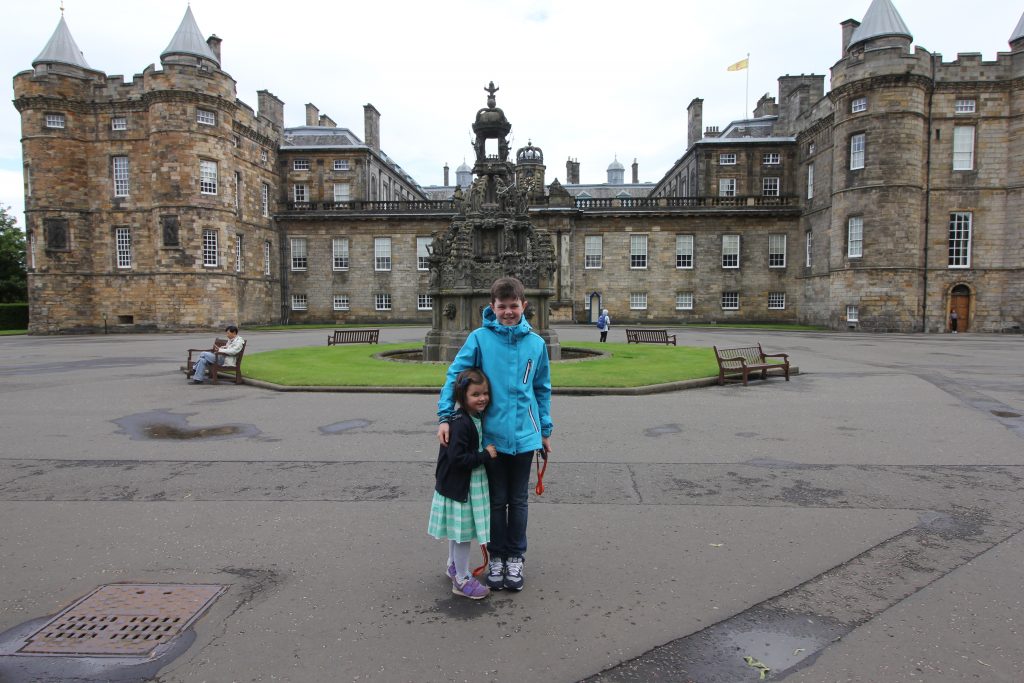 Although it wasn’t the brightest of days, I was struck at just how impressive the palace was. In retrospect, I realise that we only saw a handful of rooms compared to the many windows that cover the palace walls!

With an excitable four year-old, I’ve come to realise that any visits to historic houses, museums or the like, are not like visits without children. Sometimes kids want to go really fast, sometimes they find something that utterly captivates them, and sometimes they do the utterly unpredictable. But I think you do have to be be resigned to the fact that you won’t be reading all the information available and really – listening to audio handsets can also be tricky! 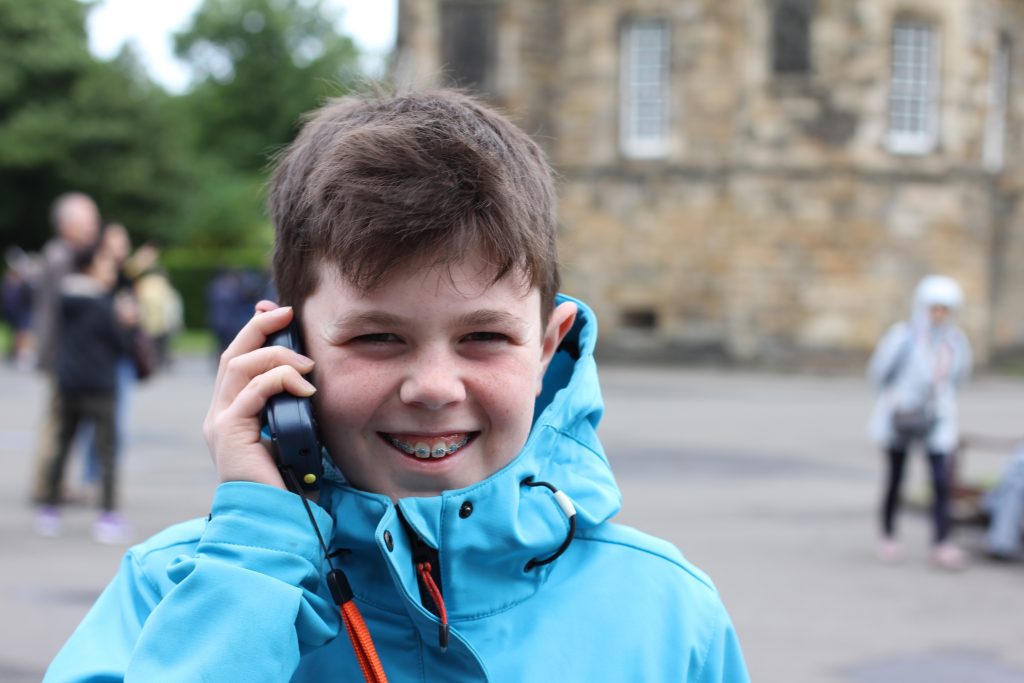 On this particularly occasion, Katie initially was quite taken with the handset but then quickly ran out of patience (which is the opposite of her behaviour on the Royal Yacht). But actually, she was really taken to imagining what would happen in each room.

Her favourite, without a doubt was the Mary, Queen of Scots’ Bedchamber. I have little doubt that given the chance, she’d fashion herself a similar room design at home!

Ben on the other hand, was really taken with a bed that had to be kept behind glass in specific conditions to preserve it. He imagined that the Queen might still sleep in it today and that the glass was simply an added security protection.

We had a great time pacing up and down the Great Gallery examining all the different pictures, trying to guess where they had been torn by marauding forces all those years ago. Whilst Katie was utterly delighted that there was someone playing bagpipes on the TV. As I said – there is utterly no predicting small children!

After touring the rooms for just over an hour (people will older children would certainly want to take longer than this!) we made our way to the family activity room. We had the entire room to ourselves and spent another hour colouring, playing hoop toss, dressing up, and pretending to cook on the stove. There was loads there for the kids and both were quite happy to wile away a rainy Sunday playing the games provided. Although despite Katie’s continued insistence for some reason Ben would NOT put on a Princess dress!

The exhibition of Maria Merian’s Butterflies is still on until 23 July 2017, but you should also be aware of the other opportunities for families this summer! Whilst there is loads on for families with the festival etc. I’m always aware that are weeks to fill of the holidays before things really kick off. You can get loads of ideas of things to do with kids of all ages from my newsletter (sign up in sidebar!). But I just wanted to highlight these two:

This family tour gives you a sneak peak behind the ropes in the state apartments. Learn about the Palace most famous residents as you handle some objects used in the past from strange smelling candles and children’s games to chamber pots. The interactive tour brings to life stories of this historic site.

Wild Stories in the Palace Gardens

Storyteller Allison Galbraith will lead you on a magical storytelling stroll through the Palace Gardens. Weaving traditional fairy and folktales with the unique features and royal history of the gardens. Hear about the cheeky ape, proud lions and other jungle creatures’ stories, who once lived in the Royal Menagerie, and of a wise old king who ruled the land with flower power. Suitable for all ages.

I’ve written before about the joy of trying new things – let me know if you give this one a go!

What’s Easter to you? To me, it was always about

I lived in Edinburgh for a good 8 years before mak

AD - As much as I am ready to celebrate our younge

Yesterday I realised that I’ve almost lived in S

There has been a problem with your Instagram Feed.